Posted on December 15th, 2011 in Uncategorized

The initial idea was to shoot the family outdoors but seeing as the weather in Cape Town is on Drugs at the moment that was not possible.
Too cold and pouring with rain (it’s the middle of summer!) forced us indoors.

Lighting the scene was the hard part.
Keeping it simple I opted for a single on camera flashgun. On its own this would have give a harsh light with ugly shadows.
To counter this, I position the subjects under an angled white ceiling, which I would aim the flashgun at.
The ceiling now became the light source, giving me a pleasing soft light that suited the image that was required.
Some shots I added a diffuser to the flashgun to further soften the light.

This was real fun shoot with the most awesome people I know. Keep in it simple worked well in this case and we got some great images that are full of character, which everyone is happy with.

This is a test shot from the shoot, I was trying to get the light right when I captured this moment.
This pic was a favorite! 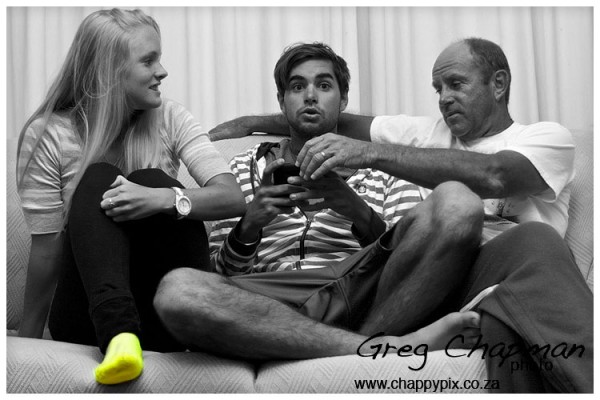